At my day job I spend all day capturing live video, compressing it, distributing it, and showing it to users.  Hence when people ask questions like, "Why do my Instagram photos look crappy?", it tends to pique my interest.  In this post I'll briefly summarize the basic workflow and offer some guidance on how to debug such issues.

There are a variety of moving parts associated with contributing image content to a site like Instagram.  The following diagram shows the basic workflow.  While not specific to Instagram's specific internal process, all these sites basically work the same and have the same components. 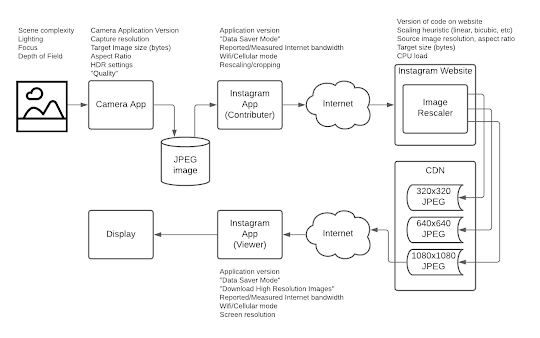 (click to enlarge)
The important consideration here is that there are two largely disconnected processes:  the process by which the content gets into Instagram, and the process that users viewing the content go through.  Problems introduced as part of the contribution process will likely impact all viewers, but there are cases where the contribution phase may have worked perfectly but different viewers see different results due to the way content is delivered to the user.
Let's quickly go through the different stages and then we can talk about how to break down the problem.
Acquisition - This essentially encompasses taking the initial picture.  This is a combination of the content itself and the camera settings used.
Question:  Why might close-up photos of an object look ok but a picture of me standing in grass in front of some trees look crappy?  Answer:  image complexity.  Bear in mind that the encoder typically has a target image size so it has to make decisions about which parts of the picture to make look best while still creating an image that is N megabytes in size.  An object in front of a solid color background is comparatively simple to encode and the compression process emphasizes ensuring the object looks good.  When you take a picture in front of a complex background the compression engine may not know what areas to optimize, and thus the encoder will dedicate more bits in the final image to making the grass look less blurry at the cost of your face looking worse.  This is why it's often difficult to take good video of soccer games or other games played on a large field.  What the viewer cares about is the players and the ball (sometimes referred to as the "Region of Interest") but the compression engine doesn't know that and thus it spends as many bits encoding the entire field at the cost of quality of the individual players.
Ingest - This is the process where you take the picture from the camera and send it to Instagram.  There is processing that can happen within the phone before it gets sent out.  The image from the camera may be decoded and re-encoded to allow cropping (either as a result of user defined cropping, or to meet an expected aspect ratio), change the resolution (e.g. Instagram has a maximum width of 1080 pixels, so anything larger than that needs be rescaled before uploading), or reduce the size of the encoded picture (e.g. change the 5MB photo into a 1MB photo at 1080x1080 prior to upload to reduce bandwidth usage).  Aside from allowing the user to crop the photo, Instagram doesn't expose many user-configurable options to control the upload process, but decisions are being made behind-the-scenes which the user won't be aware of, and this behavior may change whenever the Instagram application is updated.

Server Side Processing - this is what the website does to the photo after it's uploaded from the Instagram application running on the phone.  The main task being performed is creating multiple renditions of the image at different resolutions and bitrates.  While the user is uploading a high quality photo, it's entirely likely that some users would be better suited to receive lower quality renditions, and the rescaling/re-encoding that occurs here is how that is accomplished.  Doing it at the server also allows for the user to only have to upload a single high quality version of the picture which helps from a bandwidth perspective.  That said, it's possible that bugs in this process may result in cases where a particular rendition of an image has problems (e.g. the 1080x1080 version looks fine, but the 640x640 version look poor).

Viewing - Unlike a desktop browser, a mobile application like the Instagram app has much more complex decision making when determining which rendition of an image to download and show to the user.  In order to provide an optimal viewing experience for all users, the app may automatically do things like downloading a low quality version of an image to minimize cellular data usage.  If there is a problem with this decision making though the user may end up with poor quality images (i.e. they were connected over Wifi and had plenty of bandwidth, but are being sent the 320x320 version of the image).

"Ok, so now you've spent a bunch of paragraphs explaining how all this works in principle.  How do I actually figure out what's broken?"

Having explained the workflow, you can break up the problem to understand which stage is causing the issue.  This is especially true if you know definitively that the image quality was good at one point but has since gotten worse with new content.
For the purpose of offering an example, let's say you know definitively that image quality was fine in April, but now all the images you upload look crummy.  Here are a few concrete steps you can perform to narrow down the issue:
I hope this offers some insight that will help in diagnosing such problems.
at June 03, 2021