I miss having an office with a door

If any of you computer folk are in ACM, and get Communications of the ACM, check out the article entitled "What road ahead for Microsoft and Windows" by Michael Cusumano. Now, it's not a typical Microsoft bashing article, but rather an academic look into the effect of product complexity on delivery schedules. It's a good read.

After two trips to Home Depot and a lot of pain, I finally got my air conditioner installed. Go me! 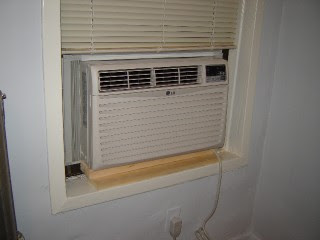 Went to Best Buy and picked up a memory stick for Mom's camera. Vikki and I are off to Italy tomorrow. Should be lots of fun. Still need to do some packing, etc.
at June 30, 2006

Got together with Naomi last night for dinner (Coffee Shop by Union Square). Good to catch up.

The saga of the air conditioner continues. I went to Home Depot last night to buy a 2x4 and waited 25 minutes to get somebody to cut it for me. Got it home, got all sweaty putting together the air conditioner, and found that the wood was measured wrong. Had to go back tonight, where I had an extended conversation with the cashier over the 1x4x24" piece of wood I was trying to buy, which I had taken from a pile of scrap where people were cutting wood to length. She ended up charging me 2 X $0.51.

Home now. Lacking the umph to finish putting in the air conditioner. I would have to get out the drill and line everything up and it's just a pain, so one more day with no AC.

Air Conditioning! (Well, not quite)

Afterwards, Dan and I went out and picked up a 12000 BTU air conditioner. Got it inside and realized that my window sill is not compatible with air conditioners out-of-the-box, so I have to get some wood cut to the proper dimensions. To add insult to injury, on Sunday I threw out a bunch of 2x4's when I helped Vikki move out on Sunday. Will have to cut some wood when I down in NJ on Sunday.

The State of Ohio is introducing a bill to ban abortion. This one is especially interesting since it also makes it a felony for anyone to take a woman across state lines to get an abortion in another state that might allow it.

On a lighter note, AT&T is changing it's privacy policy to make it easier to avoid getting sued when it hands over your information to the government:

Helped Vikki move yesterday. Not fun, but it's done now. Got home at 6:15 and had to go back to the office that night because the A/C broke in the computer room again. It reached 115 degrees before my digital thermometer hit its operational limit.

Spent part of the day trying to figure out why IBM hasn't exposed chassis temperature in its xSeries products through ACPI. It is 2006, right?

Left work at 6:15 to meet up with Carter at Bryant Park and see The Birds.

Have fallen behind in design documentation for the new project. I had a doc due today which isn't done, so I will have to finish it tomorrow morning. Have a doc due tomorrow as well, and a 10:00 am meeting with Shamoun. Starting to feel some pressure.
at June 19, 2006

Left work early last night (5:45). Vikki and I got Perogis from Veselka and then went to the movies and saw An Inconvenient Truth (Al Gore's movie on global warming). It was a good movie.

More planning today. Had meetings all day yesterday, but only one for today scheduled so far. Have a few docs to write, and may even get around to writing a bit of code.

AT&T denied making the information available to the NSA

Wired Magazine publishes AT&T's documents showing that they are doing it.

Dan, Joe, and I went to Atlantic City Saturday afternoon. I lost $112.00. Dan and Joe both walked away ahead by a couple of hundred. Dan says I'm just bad luck since the whole thing went downhill the moment I sat down at the table.

Spent the day Sunday with the family. Took Mom and Lauren to Ruby Tuesday's in the mall so Suzy could wait on us. Yardwork. Changed Lauren's flat tire.

Been doing more planning for upcoming releases. Wrote a doc on how to build/compile our software. Wrote another doc on how to use Bugzilla.

Found a neat flag in ps for all you multithreaded Linux C/C++ programmers:

Ever been on a 2.6 kernel and seen that a particular multithreaded application is burning 100% of the CPU, but you can't correlate the ps output with the gdb thread list so you can see which thread is spinning? Well,

gives you the LWP id number for each thread that is the same number that GDB shows in the thread stack.

Have to do a bunch of paperwork tonight. Pay bills, go through mail, etc. Need to book tickets for Italy tonight too.
at June 13, 2006

Vikki and I went to the Aquarium today. Lots of fun. A bit of a ride (about an hour by subway). Also checked out the boardwalk/ocean. 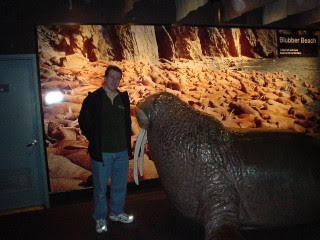 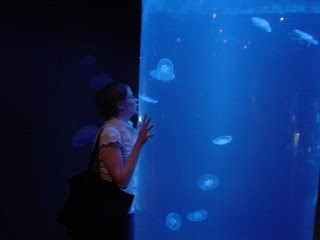 Yesterday went and did a bit of shopping.

Been looking for a PCI based 802.11 wireless network card for a while, since I don't like the 20 foot cable run across the floor of my living room. Ended up buying a ZyXEL G-302 based on an RTL8185 chipset. I chose this card because it had the Linux penguin on the front of the box, making it the only card available that actually claims to support Linux (many other cards do work, however all the others work because of reverse engineering and are not supported by the Vendor).

Got the card working in about half an hour on Suse 10, which is not so good. There was no GUI for configuring the ESSID or AP address. I had to manually edit a config file, which I'm not sure I did properly, and the network init script shows a few errors because it is calling unsupported sysctls against the card. In all fairness though, I'm using the driver that came with Suse 10 and not the driver that came with the card, so perhaps the driver on the CD would have worked better. However, after looking at the driver it appears that ZyXEL just bundled the existing open source driver with an install script. This is a good thing in that it's not like they are introducing some binary driver without the source, but it would be nice if the documentation was better.

Kudos to Realtek as well, who according to the author of the open source driver, contributed specifications necessary to get the RTL8185 working properly. Many hardware vendors wouldn't be so helpful.

Also went to the Apple store. It's a neat building on 5th Avenue. As usual, there is about ten times as much floorspace as would be required to sell their seven or eight products. But it's very upscale -- when you walk in, they put your umbrella into a convenient plastic bag before you walk down the stairs. It's amazing how busy the place was. 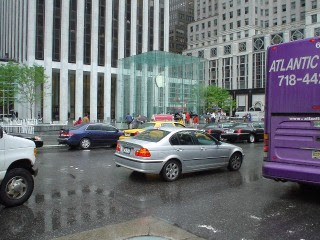 Here's a link to more photos

Today Vikki and I are going to the New York Aquarium. Should be fun. Planning on going to Jersey tomorrow to visit the family.
at June 09, 2006

Went to the Shake Shack with Eric, Joe, and Tim yesterday since it was raining, and apparently there is a new variant of "I can't believe it's not butter". Fabio apparently still draws quite a crowd. 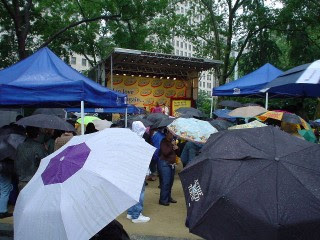 Vikki and I went to the company sailing thing. Because it was raining they ended up switching from a 80 foot sailboat that is known to be "fast but gentle" to a more traditional craft that had more indoor area. Lots of fun. The CEO in giving his closing remarks pointed out that I didn't get sick and the entire company clapped for me.

So work today was a bit stressful. We're supposed to deliver a proof of concept tomorrow and it wasn't working when I left the office after 9:30 last night. Supposedly it's working now. I have to be at the office at 7am (in two hours) to build new RPMs for testing. Will be the first time I use the car service Matt told me about a couple of weeks ago.

Didn't get to look into flights to Italy last night like I planned.

Getting ready for the post-release cleanup. Going to merge a bunch of stuff back to HEAD tomorrow. Then comes the flood of patches that were too risky to put in right before a release. I have a ton of dead code I could eliminate if I just had the cycles.

Also did work on documentation for planning next phase of development. Have to coordinate with Peter and Naoum tomorrow so I can present to Shamoun.

Have lunch meeting tomorrow so I need to not look like a mess.

Thinking a bit more about my printing problem, I should bring my Mac into the office and try it. There are drivers for Mac and I suspect it probably uses a much more standards-based printing mechanism than the Windows driver. If I can just get a single job to print from a non-Windows platform I can analyze the dump in Ethereal and get it to work with my Linux box.
at June 05, 2006

Been a pretty easy week. Since the major projects slowed down I have been able to do some design work. No work this weekend, and Shamoun gave the development group off next Thursday and Friday. July 3rd too.

Was at the office last night diagnosing why I couldn't get my Linux box to print to our Canon ImageRunner 2230 copier. Think I figured out the problem, but now I have to just work through modifying the Linux driver. Had a moment of panic where I thought I broke the Active Directory since I couldn't ping the server. Turns up as a coincidence the PDU for the rack had failed just when I was doing the testing.

Subways were all screwed up because of the rain last night, the R was completely shutdown. People in the diner this morning were saying it took them three and a half hours to get home (I just took the N so I was ok).

Did some cleaning this morning. Went to PC Richards and scoped out air conditioners. Picked up a new aerator for the bathroom sink. Supposed to get together with Vikki later this afternoon.

Need to do planning this weekend for Italy vacation.
at June 03, 2006