You know how some stoves have a drawer underneath for storing pots and stuff? Well, it turns up that on some gas stoves that's actually a broiler.

I discovered this last night when I used the oven in my apartment for the first time since I moved in. Apparently, the broiler drawer contained some pots, and the manuals/documentation for the stove.

A gallon of water later, no damage other than an apartment full of smoke. At least I know the smoke detector works. It works very well.

At least I didn't have to call the fire department. When I was growing up, my father used to say none of us were allowed to get hurt because "We don't call first aid..." Since he was a volunteer firefighter, he knew what humiliation he would face by having his home address come across the radio.
at March 26, 2007

So far been a pretty productive day. Opened a new bank account at Commerce so I wouldn't feel guilty bringing my $572.66 worth of unrolled change there. Dropped some stuff off at the new apartment. Browsed some of the local computer shops in midtown (DataVision, CompUsa). Took a stroll through the New York Public Library three blocks from my apartment. At work now trying to get caught up on some stuff I fell behind on during the week.

Vikki is on her way to New York. Dinner at Veselkas! Wohoo!

This is the first year that I wasn't excited about it opening since I'm a vegetarian now and the idea of a burger joint opening for the season, well, you get the idea.... However:

Vegetarians can get greasy, too. The tasty 'shroom burger's portobello patty is muenster-stuffed and deep-fried.

Been reading up on the Intel SSE3 instruction set. Hoping to do some hand-optimized assembly for the MythTV deinterlace filters. They suck up so much CPU time it's ridiculous.
at March 24, 2007

Spent the last few nights helping debug a project being deployed in Australia. It's a good thing, except they're fifteen hours ahead of us so it has resulted in some late nights.

Went to look into getting a new floor for the apartment. They're supposed to call me back to make an appointment to take measurements. Have to get the whole thing moving since I have to be out of my current place by May 1st.

Finally figured out why the picture was so crappy on my MythTV. It had been having problems where the white portions of the screen were way to bright. Everybody looked like the aliens from the movie Cocoon. Turns up there's a checkbox called "Use XV for picture control". Click that checkbox and all of a sudden the picture is perfect.
at March 22, 2007

So I bought a new Macbook a couple of months ago. One of the new features that all new Macs have is a built in camera. I noticed that, and saw the PhotoBooth program that Apple provides and thought, "well, that's neat". It comes with some pretty basic filters, the type of crap you find in PhotoShop lite (sepia, fisheye, b/w, colored pencils, etc.). Played for it for about two minutes and then forgot about it.

Vikki discovered it last Sunday and got sucked in, playing with it for an afternoon. Here are some of the pics she took: 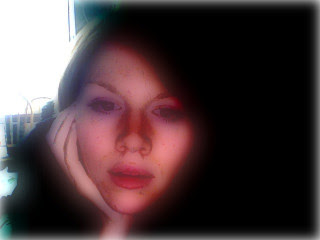 Closed on my apartment yesterday. Decided I hate laywers (except for mine). The bank's attorney showed up almost an hour and a half late. But it's done now and I'm breathing a sigh of relief. Now I just have to do the little things. You know, like putting down the new floor, or remodeling the bathroom, or finding movers to move all my crap from Queens.

Spent the first night there with Vikki. Had gone out earlier with her, Leah, Sarah, and Leah's boyfriend for some really good vegetarian Indian on Lex.

Spent the bulk of the day packing. Watched a little TV. Tonight Vikki and I watched Who Killed the Electric Car. I really liked it, and would recommend it to those who are looking for stuff to put on their Netflix list.
at March 17, 2007

The whole company went bowling last night. Much drinking ensued during/afterwards. Rob and I won twenty bucks after beating Dan and Bill. I have a stomach ache now, probably from having a dinner consisting of tortilla chips, fried cheese sticks, and Sprite.

All of a sudden my MythTV box seems to be working really well. There seems to be much less latency. Wondering if perhaps having fixed the cable select on the DVD drive resolved some non-obvious performance problem.
at March 14, 2007

Haven't written in a while. Been pretty busy. Spent weekend in NYC with Vikki. Been getting packed for the move, etc. Closing has been locked in for this Friday.

Started doing some more with HP-UX. Needed to recompile gSOAP with the native HP-UX compiler, and found some fun things that make it unique.

For example, tracked down a difference between HPUX make and GNU make which boils down to the following hypothetical Makefile:

This basically results in:

On GNU make, it's smart enough to realize that foo.a is a symlink to foo.b. On HPUX apparently it always thinks foo.a is older than foo.b, so it tries to recreate it every time make is run.

In other words, with GNU make we get:

while on HPUX make we get: