A short little rant on WordleBot

I've been playing Wordle since early January, and it's one of my favorite games (behind Spelling Bee).  I've spent alot of time thinking through various strategies, and in fact wrote my own little solver many months ago.

Last month the New York times introduced "WordleBot".  Available only to NY Times subscribers, it's a neat little tool which looks at your most recent game and offers some feedback on how you did, and how you could have done better.

It's fun to see how their solver attacked the problem, compare your approach to it, and see a bunch of underlying statistics on possible approaches.  That said, it's got one little property to it that really annoys me.

To illustrate my point, let's look an example I captured a couple of weeks ago:

Now in the above example, I actually out of dumb luck arrived at the same second word that the Bot would have chosen.  What caught my attention though was that it said there were only five possible solutions.  However, there are actually quite a few more possibilities: 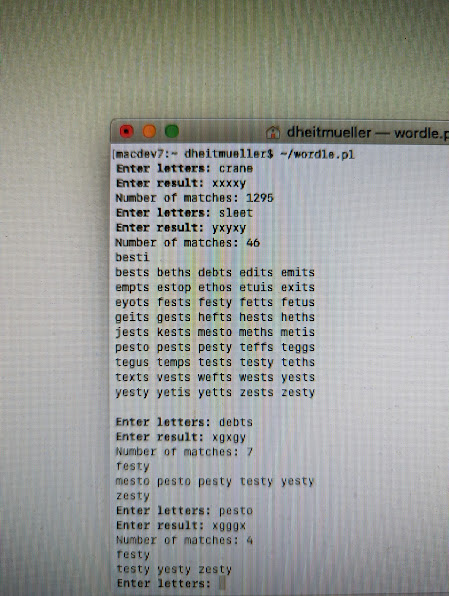 Understanding why my tool said there were 46 possible solutions after the second word and why WordleBot claimed there were only five requires us to delve a bit into the definition of "solution".
There are actually two lists of words that come into play here.  The first is the list of possible five-letter words in the English language dictionary.  The Wordle dictionary has 12947 words, but that assumes you have extracted the list from the the source code to the app.  When I wrote my original solver I actually used the standard dictionary that ships on most Linux systems, which has 10230 five-letter words.  But while that's the list of possible words, many of those are far too obscure to ever guess with only six chances (people would be annoyed if the answer to today's puzzle was something like "amahs").  As a result, the author asked his partner to go through the list of words and pick out all the words she recognized.  This resulted in a much smaller list of possible solutions (about 2500 in total).

The key here is that when Wordle says there are only "five possible solutions", it's taking advantage of the fact that it knows this much smaller list.  So when it says things like, "there's only one solution left so you should get it on the next turn" it's making an unrealistic assumption that the user also knows which of the 12947 words make up the list of possible solutions.  This just feels unfair.

My suggestion is that the WordleBot would be on a more level playing field if it used the complete list of 5-letter words when narrowing down the list.